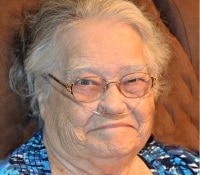 Alice (Michael) Depew, 81, of Fortville passed away in her home on January 8, 2015 following an extended illness. She was born on March 22, 1933 in Indianapolis, IN to the late Jesse Harold and Thelma (Burdette) Michael.

She was a member of the Grandview Church of the Brethren in Pendleton.

Alice worked for more than ten years at Orange-Julius in Castleton Square Mall and served as a local Avon representative. She was an avid bingo player and also spent many hours enjoying crossword puzzles.

Funeral services will be held at 1:00pm on Tuesday, January 13th at Grandview Church of the Brethren with Chaplain Thomas McEwen officiating.

Visitation will be from 11:00am until the time of service at Grandview Church of the Brethren, 9064 West Grandview Boulevard, Pendleton, IN 46064.