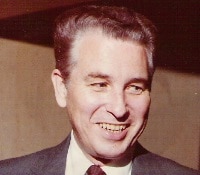 It is with great sadness that we announce the passing of Allan F. Decker, son of Reverend Oscar and June Decker, on Friday, November 30, 2018 in his home in Anderson, Indiana.

Allan worked hard throughout his life. Whether helping his brother run numerous entrepreneurial activities as a boy, running a soda counter at the local drugstore as a teen, or working as a prison guard to help pay for college, Allan carried his own weight, and the weight of those near him. While at the University of Nebraska, he was called to serve in the Army during the Korean War, and Allan later returned to complete his law degree. After graduating, Allan was a FBI agent, and later made a career in trust banking, as he and Teckla started a family.

He served his community in various positions over the years, including as: a member of the Charleston Beautification Committee, a member of the Charleston Yacht Club, President of the Southwest Florida Council of the Boy Scouts, a member of the board of Lee County Mental Health Association, and a member of the board of the Johnson County Airport Authority. Allan was a follower of the Lutheran faith, serving on numerous church boards over the years. In 2015, he received the Congressional Gold Medal for his service in the Civil Air Patrol during WWII. Allan and his family lived in South Carolina and Florida during his professional career. While in Florida, he founded and served as the President of the National Trust Company. Allan and Teckla retired to Mountain City, Tennessee, and they also maintained a home near their son in Indiana.

Interment will be held at 1:00 p.m. on Saturday, December 8, 2018 at Westover Memorial Park cemetery in Augusta, Georgia. Pastor David B. Hunter, Sr. of the Lutheran Church of the Resurrection will officiate.

In lieu of flowers, if friends so desire, donations can be made in Allan’s memory to the veterans’ organization of their choice.