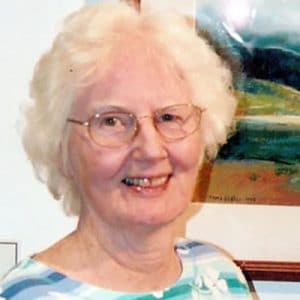 Anne Chestnut Weber was born in Chicago, IL in 1937 and died at age 83 after a brief illness.  She was married to James Weber, her beloved husband, for 52 years.

Anne received a Bachelor of Science Degree in Chemistry from Marquette University in 1959, when it was unusual for women to enter the sciences.  After her children grew up, she received a Bachelor of Fine Arts from the University of New Hampshire in 1982.  Anne worked as a chemist at the Chicago Medical School and in Columbus, OH before devoting her efforts to being a full time professional artist.

Anne moved with her husband Jim to Springville, UT in 1998.  She said, “When I first saw the Utah mountains, I was amazed by their beauty.  Living in Springville gave me a chance to see the mountains at all times of day and all seasons.  I have never gotten tired of the view.” In Utah she loved to paint the beautiful landscapes of Utah mountains and deserts.  She was a frequent exhibitor in the Springville Museum Spring Salon and participated in many art exhibits in Utah and other states, winning several awards. She served on the Utah County Art Board for several years and was a member of the Utah Valley Artist Guild.  Anne was a volunteer at the Springville Museum for many years.  She was well-known in both New Hampshire and Utah for giving demonstrations in pastel painting to amateur and professional artists.

Anne has lived in Indianapolis for the last several years.

She will be remembered as a woman of dry wit and rare intelligence.  A lifelong reader with a tremendous memory, she became an expert in any subject that interested her.

Anne’s children and granddaughter gave her much joy.  She was much loved and her death is a great loss to her family and friends.

A memorial will be held at a later date, to be announced.

In lieu of flowers, memorial contributions may be made in her name to St. Monica Catholic Church.