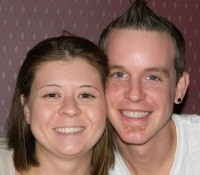 amin L. Smith, 34, of Arcadia, Indiana passed away unexpectedly in his home on September 2, 2015. He was born in Madison, Indiana on February 26, 1981 to Vince and Georgette (Chumley) Smith.

Benjamin had two passions – friends and music! He combined both of these interests by playing lead guitar in his band, “Soul Pariah”. When he wasn’t playing metal music with his friends, he loved to spend time with his family and watch horror movies.

Benjamin is survived by, his fiancée, Denice Kiefer of Arcadia; one daughter, Nevaeh; one brother, Jeremy Smith of Cicero; two sisters, Melissa Zwarka of Atlanta and Marcia Smith of Noblesville; one brother-in-law, Chris Zwarka of Atlanta; his parents and his grandfather, Robert Smith of Lafayette, IN.

He was preceded in death by his grandmother, Ethyl Mae Smith.