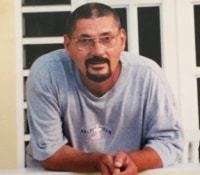 Camilo Escobar Mendez, 67, of Anderson passed away on May 14, 2016 at Kindred Healthcare of Castleton. He was born on March 10, 1949 in Puerto Rico to Camilo Escobar Gonzales and Juana Mendez Acevedo.

Camilo will be remembered as a tender-hearted, sentimental man who cared deeply for his family. He loved to sing and dance and his playful spirit will be missed by everyone he touched.  When he was young,  he had a passion for making and flying kites, fishing and going to the beach since he lived in a walking distance of the ocean.

He was preceded in death by his parents; two sisters, Edna and Irma; and three brothers, Felipe, Luis and Hector.

The family would like to extend their heartfelt gratitude to a very special nurse in Puerto Rico, Gladys Gonzales, who was truly a blessing to the family in the way she cared for Camilo.

A Funeral Mass will be conducted at a later date.