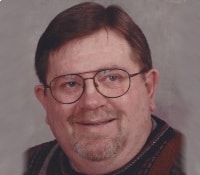 Jack is a graduate of Anderson High School (Class of 1963).  He served in the U.S. Army and was stationed in Gelhausen, Germany with the 1st Battalion, 33rd Armor Division.  Jack retired from the Anderson Police Department in 1994 after 27 years of service as a police officer.  He also worked at the Community Justice Center.

Jack was proud to have been recognized for organizing an annual reunion of the 1st Batallion, 33rd Armor Division.  Founded in 2006, this annual event was held for many years.  Jack was an avid racing fan and was a member of the Ray Fullen pit crew who traveled the American Speed Association Racing Circuit.  He enjoyed researching genealogy and was a history buff who loved to share stories about the history of the Interurban Railroad.

The family would like to express their gratitude to everyone at Heartland Hospice for their support, love and care.

A funeral service will be held at 3:00pm on Monday, June 1, 2015 at the Millcreek Civic Center, 403 W. Main Street in Chesterfield, IN with Rev. Dr. Don Weston officiating.  Visitation will be from 11:00am until the time of service.

Memorial contributions may be made to the American Heart Association.