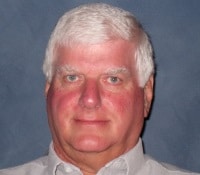 James E. (Jim) Johnson, 70 of Indianapolis, ended his courageous battle with pulmonary fibrosis and went home to the Lord on September 15, 2015 surrounded by his loving wife, Carol, and his family.  Born in Louisville, KY on September 28, 1944 to Emerson and Elizabeth (Rench) Johnson, Jim moved to Elnora, IN with his mother at the age of five weeks while his father was in WWII.  He contracted polio when he was 3½, spent nine months in Riley Hospital learning to walk on leg braces and crutches, and had a tutor at home until the 7th grade when he was finally able to attend public school.  Jim graduated from Purdue University in 1966, long before buildings were considered accessible to the disabled.  At Purdue, Jim met the love of his life, Carol (Martin) Johnson.  After moving to Indianapolis in 1972, he worked in finance at Citizens Gas for 35 years, retiring in 2007.

An only child, Jim’s parents preceded him in death.

Despite his physical challenges, Jim lived a full, rewarding life, loving his wife and family more than words can say.  He enjoyed sports, music, movies, plays, and concerts.  Following retirement, he also wrote many articles for his home area newspapers about growing up in the tiny town of Elnora.  Jim was an active member of Indian Creek Christian Church.

In lieu of flowers, contributions may be made in Jim’s honor to the Pulmonary Fibrosis Foundation.