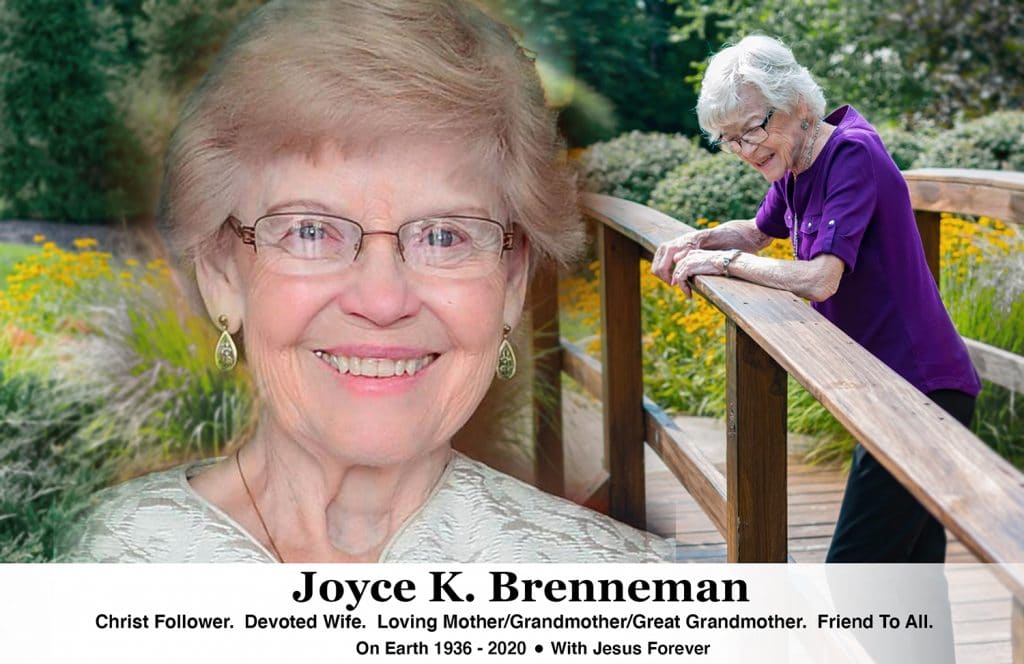 Joyce Brenneman’s “Celebration of Life” will stream live on youtube on Sunday, March 22 at 4pm ET.  All are welcome to join and type your comments as you watch.  Please use this link which will contain information on backup procedures and technical support information:

The service will be archived for later viewing as well.

Joyce (Kauffman) Brenneman, 83, of Fishers, Indiana passed away at IU Health Saxony Hospital on March 17, 2020 following an extended illness.   She was born in Hutchinson, KS on August 1, 1936 to Alpha and Ida (Bontreger) Kauffman.

Joyce is a graduate of Haven High School in Haven, KS and attended Goshen College.  She began her career as an administrative assistant at Zimmer Biometrics in Warsaw, Indiana and then moved to the Free Methodist World Headquarters in Winona Lake where she served for nearly 20 years.  Most recently, she worked for the Kennedy Living Center in Martinsville, Indiana.  Joyce was a member of the Winona Lake Free Methodist Church where she spent many years teaching Sunday School.

Joyce was guided by her faith in Jesus and is with Him now in Heaven.  She wanted everyone to know His love and accept his free gift of salvation.

Joyce will be lovingly remembered as a caring neighbor with a heart for service!  Her passion was taking care of her family.  She loved to prepare and host family dinners and she never met a stranger.   Joyce enjoyed bird watching (hummingbirds were her favorite), hiking on the trails in state and national parks and admiring the simple beauty of plants and flowers.

She was preceded in death by her parents; her brother, Carl Kauffman; her sister, Norma Martin and her brother-in-law, Dale Martin.

Memorial contributions can be made in support of her first great grandson, Evan, who has a rare disease called Prader-Willi Syndrome, which can make people feel unending hunger.  Research contributions in her honor can be made at https://teamevan.org.

A streaming video service is being planned with final burial in Crown Hill Cemetery, Indianapolis, as part of an IU School of Medicine’s Anatomical Education Program at a later date.