A. Kenneth Hall, Jr. (Ken), 78, of Indianapolis, entered into eternal rest on May 30th, 2022 at the Franciscan Hospice House; thank you to those that cared for him. Ken is preceded in death by his parents, Adolph Kenneth Hall and Jacqueline Barnhill; a half-brother, James L. Dickerson of Homerville, GA; the family’s first dog, Bridgette, who he grew to adore; and close cousins and friends. Ken is survived by his wife, Sue; daughter, Kristin Hall of Milford, CT; and sister, Joy Lynn Hall of Miami, Florida as well as extended family in Georgia. Also surviving Ken is his beloved rescue dog, Lucy—a spunky chihuahua/dachshund mix that he chose himself from the local shelter.

Ken was born in Valdosta, Georgia in 1943 and spent most of his childhood in Hahira, GA. Later, he moved with his family to Miami where he finished high school and went on to attend Miami-Dade Community College. Ken met his wife, Sue, while she was attending school at the University of Miami in 1966. He eventually decided his bachelor days would come to an end when he proposed; and, they married in December of 1968 in Sue’s hometown of Milford, CT.

Ken served in the Army for 7 years in the Vietnam era as most men his age did. After basic training, he graduated from Officer Candidate School in Ft. Benning, GA and was sent to Korea to serve as a member of the military police. Ken reminisced in the weeks before his death that of the many trips he and Sue took, his favorite was from those early years when she came to visit him while serving in Korea, and they took a side trip to Japan. Ken went on to achieve the rank of Captain before his honorable discharge in 1974. Later in life, Ken joined the American Legion and VFW. Ken served as a Commander for the American Legion Centennial Post 1919, as well as a member of the American Legion Honor Guard rendering military honors to veterans during funeral/memorial services. Ken also served as a Chaplain for the VFW Post 5864 in Greenwood, IN. Ken was a very proud veteran, but now his march is over.

Ken’s wife pushed him to advance his education, and that he did. He graduated with a Bachelor’s degree from William Carey College (now University) in Hattiesburg, MS, and a Master’s in business from the University of New Haven in Connecticut. His first job after achieving an MBA took him and his young family to Indianapolis, IN where he had a lucrative career in food sales; he even dabbled in owning his own business and opened two Subway franchises in the 1980’s in Bloomington, IN before everyone began to “eat fresh.” His fortune wasn’t meant to be in footlongs, but he fell back to what he knew: food sales. That career path afforded him the opportunity to enjoy many hobbies such as: season football tickets supporting his favorite Indiana Hoosiers, travel (many Caribbean destinations and cruises), SCUBA diving (he even roped his wife and daughter into get certified so he wouldn’t get “dummy dive partners”), and flying after obtaining his private pilot’s license. Ken was also an avid reader of military history, a gun collector, and a HUGE college football and basketball fan.

Those who knew Ken best know he was often unapologetically politically incorrect. It was often “his way or the highway!” He enjoyed rousing his Left-leaning daughter signing her up for GOP newsletters and email/ text campaigns from the Trump family, as well as subjecting her to Fox News when she visited. But that’s who he was: he liked what he liked. And speaking of liked, when jokingly asked a couple of weeks before his passing whether he had any regrets marrying Sue, he looked her way and said, “She was the best thing that ever happened to me.” Indeed she was, they were holding hands when he drew his last breath.

Ken often sent off his daughter with the phrase, “I’m glad you got to see me!” So, in this case he’d definitely say, “I’m glad you got to read about me!” In Ken’s honor, please consider a donation for the animal shelter where Lucy was adopted, Rosie’s Southside Animal Shelter and/or to the Greenwood VFW. No amount is too small for either organization and will be appreciated. A memorial service will be held at the Greenwood VFW at a later date to be announced. 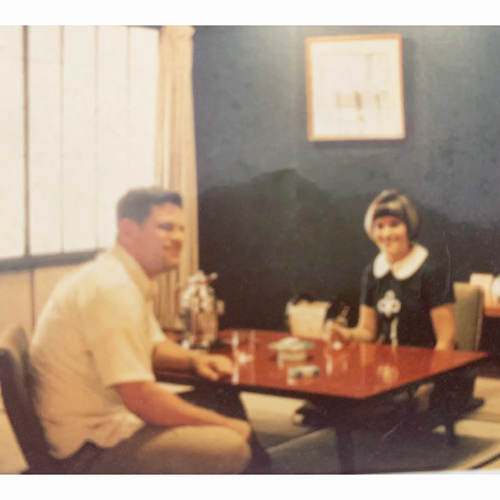