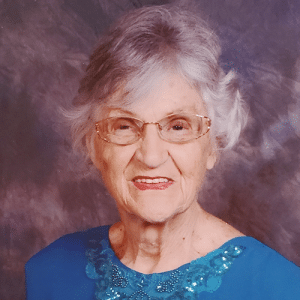 Mable passed away peacefully of natural causes.  Mable was being visited and comforted by family and familiar staff members at Northwest Manor & Health Care Center in Indianapolis, Indiana.  Mable was 92 years old.

Mable Waller was born in the small community of Center Point in Monroe County Kentucky in 1929. She was the second child of Elmer and Ova Waller.

Mable’s very early life was spent living on a farm where she enjoyed riding her horse Smokey and playing in the fields.  Her family later purchased a store and moved to a house located next door.  This was a fortunate choice for the Waller family as they seemed to have the basic needs in life during the great depression.

Having been educated in a two-room schoolhouse, Mable exceled in classes learning subject content from the older children.  She graduated from Tompkinsville High School at age 16.  After graduation, she attended business school in Nashville as well as Western University in Bowling Green, Kentucky to earn a certificate to teach school.  Mable married James Taylor and delivered her first child, Lee Taylor.

Mable later moved to Indianapolis after becoming a single mother and worked for the Richardson Battery Company.  While living in Indianapolis, she married Clifford Walker and had three children.  After her divorce, she later became employed by Underwriters National Assurance Company where she was promoted to the position of Underwriter.  Mable retired from the Indianapolis Metropolitan Police Department and later retired again as the Secretary for her church at age 84!

Mable was the life of the party with friends or at family gatherings.  You can be sure that everyone that met her enjoyed their visit. She was a loving mother to her family, helped to care for her grandchildren and enjoyed working in the yard.  She was a beautiful singer and enjoyed singing songs from the church hymnal.

Mable was a member of the Franklin Road Church of Christ and was very involved in programs and community events.  Her best friendships were made with the members of the church.

Mable is preceded in death by her son, Stephen, her father, Elmer Vogel Waller, her mother Ova Hammer Waller, her sister, Virginia Mildred Smith, brothers Jay and Judge Waller, her grandson Eric Taylor as well as a niece, Lisa Waller.

Mable generously donated her body to the Anatomical Education Program at Indiana University School of Medicine.  This gift will contribute significantly to the advancement of health science education in the state of Indiana.  Those, like Mable, who decide to bequeath their bodies to the health sciences have made a significant contribution that benefits the qualify of life and care for the living.

There will be a service conducted through the IU Medical School for family and a few friends in October 2022 at Crown Hill Cemetery in Indianapolis once the current students have completed studies.  Unfortunately there will be no other service this year due to Covid19 concerns.

If you are interested, donations memorializing Mable may be sent to the Franklin Road Church of Christ, 901 N Franklin Rd, Indianapolis 46219.