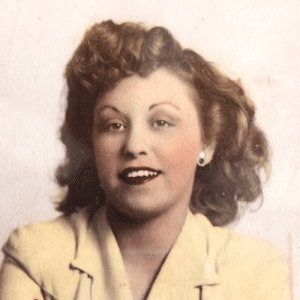 Nancy Leah (Frank) Whittinghill died at home April 6, 2021 three months short of her 99th birthday.  Born July 10, 1922 to Albert and Alma Frank in Youngstown, Ohio, she was the oldest of seven children and survived five of them.  A brother, Harry “Fritz” Frank lives in Fort Lauderdale, Florida.

A strong-willed and independent young woman, she moved to Miami Beach at 18 in the midst of the Great Depression and the beginning of World War II in Europe.  She met Bob Whittinghill through her father, who gave the names and address of his three eldest daughters to a group of service men he befriended at a bar in Dayton, Ohio.  Two weeks later, Bob found the note in a shirt pocket he was sending out to launder.  He wrote to Nancy, and that started a four-year correspondence while Bob served in the Army Air Corps in Burma.  They first met in 1945, when he came home from the war and met her in Cleveland.  They married March 5, 1946 and moved to Indianapolis where, except for a few brief years, they lived the rest of their lives.  They raised four daughters – Gloria (1947), Diane (1948), Mary (1955) and Suzanne (1957), on the eastside where the family attended Holy Spirit Catholic Church.  Bob died in 2002, and Nancy subsequently moved to the southside and lived independently until her last few years when she moved in with her daughter, Diane, at Geist Reservoir.

Nancy was a mother and housewife before going to work in retail in the 1960’s, which was considered unusual at the time.  She thrived as a salesclerk and ultimately a department manager for H.P. Wasson’s Company.   She later helped Bob in various businesses and at the bar they owned on south East Street.  She was artistic, with a sense of fashion and interior design.  That artistry showed in the rugs she hooked and her ability to search out auctions and rummage through antique stores and thrift shops, always managing to find the one perfect item.  She helped all her daughters establish their homes, sewing curtains and pillows and advising on color schemes and furniture layout.  She came from a card-playing family and loved nothing more than a good game of euchre or pinochle.  Amongst her family she was known as a fierce competitor, but something of a bad loser.  She loved her nightly cocktail, good chocolates and butter pecan ice cream.

She had five grandchildren and seven great grandchildren who lived nearby and saw her often.   She is preceded in death by Bob and a grandson, Chad Lepper (Kim).  She is survived by her daughters Gloria Lepper (Rick, deceased) and Diane (Joseph) Walsh in Indianapolis.  Grandsons Ryan Lepper, Matthew Walsh (Dylan Tracey) and Michael Walsh (Leanna) also live in the City, as does her only granddaughter, Amy Gillum (Michael).  Her daughters Mary Thompson (Dick) and Suzanne Whittinghill (Bruce Dorrbecker) reside in Washington State.  Great-grandchildren include Sofia and Olivia Gillum, Riley and Ryanne Lepper, and Nathan, Sam, and Avalee Walsh.

She was blessed with a good life and a good death, and her family grieves her passing.