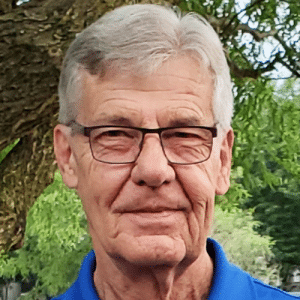 Ray was born on September 27, 1945 in Drutte, Germany of Latvian heritage. His family immigrated to the United States in 1950 to pursue the American dream, after fleeing the communist state of Germany. Ray grew up in neighborhoods north of Indianapolis. In his youth, he was a pitcher for the Carmel High School baseball team and enjoyed competitive sailing. Ray served in the United States Army reserves between 1967 to 1971 and later as a two-term elected member of the Fishers Town Council, where he also helped launch the Fishers youth soccer program. In recognition of his dedication for the enhancement of the quality of life in Fishers, Ray was awarded with a “Key to the Town” in 1988. He became a skilled machine shop toolmaker, before a successful and impactful 41-year career as General Manager of Covert Industries, alongside his friend and mentor Jim Covert. Ray was an avid outdoorsman and master gardener who loved being near to water, fishing and was known as a devoted sports fan.

Ray’s family will welcome friends to a celebration of his life from 3pm to 8pm on December 10 at his home in Indianapolis. In lieu of flowers, donations can be made to the Susan G. Komen Foundation or a charity of the donor’s choice.