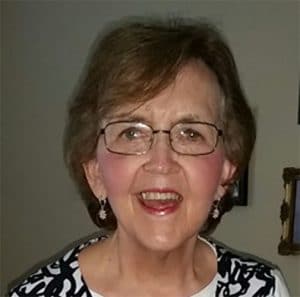 Sandra Lee Kenny, 74, of Indianapolis, IN, went home to be with the Lord on Tuesday, May 19, 2020.  A celebration of life service will be held in August 2020 in Indianapolis.  Burial will be at Memorial Park Cemetery in Indianapolis.

Sandy was born in Racine, WI, on August 10, 1945, to the late Allen and Lorraine Gunderson.  She graduated from Park High School in Racine, and continued her education at Moody Bible Institute in Chicago, IL.  While at Moody, she met her husband, Larry Lee Kenny.  They married on June 15, 1968.

Sandy was a friendly, vivacious and generous person.  She loved people well and had a way of encouraging them with spiritual advice and prayer. Her grandchildren described her as being caring, faithful, sweet, funny, laughing a lot, and playful (playing hide-and-go-seek with her at the mall). She enjoyed playing the piano, singing in the church choir, shopping, Disney, traveling, and eating out with friends and family.  She was also actively involved with the women’s ministry at her church.

Sandy is survived by her brother, Richard Gunderson of Chaska, MN; her sister, Linda (Mark) Charbogian, of Racine, WI; her son, Mark (Monica) Kenny, of Franklin, TN; her daughter, Lori (Gary) Carter of Indianapolis, IN; her son, Steven Kenny, of Franklin, TN; her brother-in-law and sister-in-law, Jim and Kathy Berg, of Janesville, WI; six grandchildren, and numerous nieces and nephews.

The family wishes to thank Rosegate of Indianapolis, IN, for the loving care they gave Sandy over the past year.  They would also like to thank the doctors and nurses at St. Francis Hospital for the comfort and care they provided to Sandy during her last days.