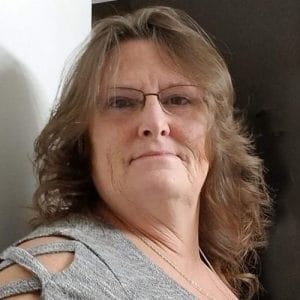 Sheila graduated from Elida (Ohio) High School in 1983 and later married Jack Small, her husband of 21 years.  Jack held a special place in her heart.

Sheila was a long-time employee of Walmart in Muncie where she was affectionately known to many of her special customers as “She-She”.  Recently, Sheila began her career as a Correctional Officer with the Indiana Department of Corrections in Pendleton, IN.  She was very proud to serve there.

Sheila will be remembered by everyone who knew her as an amazing person — everyone she met was a friend!  She lived life to the fullest and touched the lives of countless people.

Sheila is survived by her mother; one sister, Machele (Chuck) Williams of Elida, OH; one brother, Vernon (Lisa) Fox of Waynesfield, OH; two step-children, Jack and Lora; and 5 grandchildren, Landan, Jaxon, Gatlan, Cooper and Hudson who she absolutely adored.

She is preceded in death by her father and one brother, Robert Fox.

Sheila was very fond of dogs.  In lieu of flowers, the family requests donations be made to the animal care organization of your choice.

A celebration of Sheila’s life will be held at a later date.