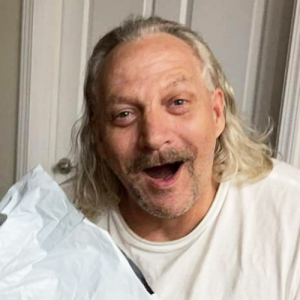 Timothy Keith Adkins, 55, of Lapel, passed away unexpectedly on July 20, 2022 at IU Health Ball Memorial Hospital in Muncie. He was born in Anderson, IN on December 27, 1966 to Edgar and Linda (Smalley) Adkins.

Tim is a graduate of Anderson High School where he played baseball. Tim will be lovingly remembered as someone who “thought he was funny!” and marched to the beat of his own drum. He wrestled with many demons, but actually had a soft heart and would do anything to help someone in need. He enjoyed camping with his friends at Hidden Lake and playing the drums.

Tim is survived by his wife, Desiree (Lyons); two daughters, Haley Doty and Kendra Penn; a son, Matthew (Lexi) Penn, a step-sister, Elizabeth (Gary Whitson) Freestone; grandchildren, Corey, Bella, and Mason; and two nieces, Rosemary and Stephanie; and one nephew, Caleb. He will also be missed by some very special people in his life, Jonnie Davidson, Scott Hedgecraft, Trina Gaither, Todd Fisher and Brian McVey as well as other loving nieces and nephews.

Tim is preceded in death by his parents; his sister, Ann Adkins; and his brother, Chris Adkins.

A celebration of Tim’s life will be held at a later date.