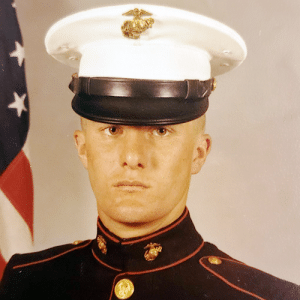 Tom enlisted in the United States Marine Corps during his senior year of high school and was stationed at Camp Lejeune, NC as a Field Radio Operator.  He was subsequently deployed to Grenada and Beirut where he was decorated for outstanding performance of duty.

Tom enjoyed spending time watching action movies on his big-screen television.  He took great pride in taking care of his GMC Denali truck.  He will forever be remembered though, for his love of his nieces and nephews.  Family gatherings will not be the same without watching Tom entertain all of the children.  He was a source of joy and laughter for his family.

Tom is preceded in death by his father; his sister, Sheila Kirksey Wallace; and his brother, Ted Kirksey.

Graveside services will be conducted at 10:00am on Saturday, October 16, 2021 at Park Cemetery in Greenfield (621 S. State Street).  Military Honors will be presented by the Indianapolis Metropolitan Memorial Honor Guard.

In lieu of flowers, memorial contributions may be made online to Disabled American Veterans at www.dav.org/ways-to-give/