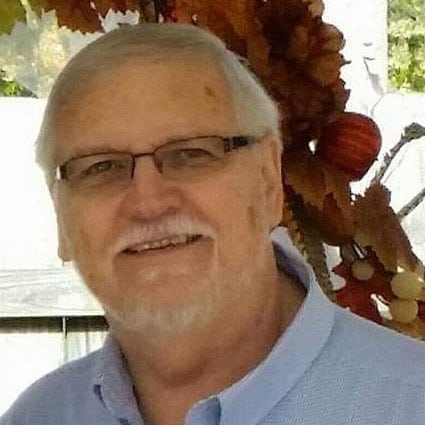 Garry W. Poindexter, 75, of Muncie was surrounded by his family when he passed away on November 15, 2019 at Elmcroft of Muncie.  He was born on October 30, 1944 in Henry County to Wilbur and Beatrice (Lacy) Poindexter.
Garry is a 1963 graduate of Union High School where he was a member of the basketball team.  He proudly served his country as an Airborne Ranger in the Army National Guard.  Garry worked for the American Speed Association as “The Voice of A.S.A.” for more than 20 years; he got his start in 1971 as a P.A. announcer for the Muncie Raceway.
The things Garry loved most in this life were his wife, family, country, and auto racing.  He focused his time and attention on those things that were most precious to him.
Garry is survived by his loving wife of over 34 years, Susan (Ransdell) Poindexter; one son, Todd (Kim) Poindexter of Alexandria, KY; one daughter, Wendy (Les) Reese of Muncie; two step-sons, Michael (Teresa) Johnson of Fishers and Jeremy (Kelly) Johnson of Indianapolis; and one sister, Freda Kay (Allen) Teagle of Henry County.  His grandchildren, Kelci, Denver, Samantha, Jacob, Michael III, Benjamin, Corbin, and Mitchell also survive as well as five great-grandchildren and several neices and nephews.
He is preceded in death by his parents; his brothers Victor and David; and his nephew, Neil.
A celebration of Garry’s life will be held from 3pm – 6pm on Friday, November 22, 2019 at the Stoney Creek Township Community Center (7292 US Hwy 35 South in Blountsville, IN).
In lieu of flowers, please feel free to donate to LBDA.org. in his honor.
Heather2019-11-28T00:16:50+00:00